This gym offers metro Detroiters a new type of workout, one sensor at a time 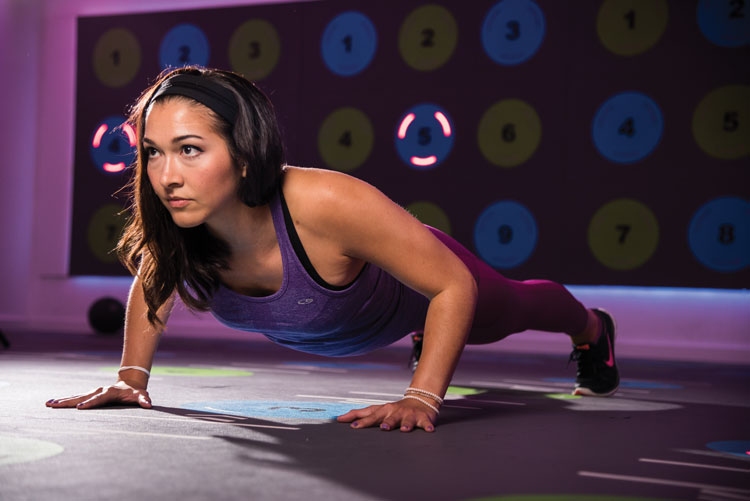 possible. My core muscles tighten as club music blares over a speaker system, and I can only assume that my face is as red as the lights flashing around me.

To my left, a small group is doing a combination of box taps and jumping jacks, and on the other side of the room, multicolor lights emerge from the floor as partners run on circular sensors.

Forty-five seconds pass and an alarm sounds, a blue hue and calming tunes fill the facility, and I stand up to progress to the next station.

This isn’t a virtual reality fitness program or a Wii Sports game. I’m on round two of four at a beginner class at Area 45 Fitness, a Troy-based workout facility with a video game-esque aesthetic.

The gym offers a range of HIIT workouts — high-intensity interval training, an exercise style that has been named one of the top worldwide fitness trends by the American College of Sports Medicine — for both beginners and fitness enthusiasts.

With the success of programs like P90X, Bikini Body Guide, and 21 Day Fix, all of which include HIIT in their training regimens, this type of fitness isn’t a novelty. Area 45 Fitness’ tech-driven gym concept, however, is.

“There’s nothing like this,” says Revan Hermiz, director of the gym, which opened in March as the first of its kind in metro Detroit. With an interactive floor plan designed by Spain-based flooring innovator Pavigym, the facility features various lights, ground and wall sensors, and software that can create more than 100,000 different workout combinations. “Every time you walk in we have something different.”

This is my second time at the facility, and so far, Hermiz is right: This workout is nothing like my last.

All 10 participants in today’s rendition will work through four rounds at eight different fitness stations. Prior to the start of the circuit, an instructor demonstrates both low- and high-intensity versions of lunges, weight-lifts, scissor kicks, shuffles, jumping jacks, squats, and more, which will be completed during the 45-minute class.

Groups of two to three form, and my partner and I find our place at two circular patterns on the floor that make up station ‘A.’ Using the lines on the ground as a guide, we squat and jump for 45 seconds before getting a 15-second break and moving to station ‘B,’ which calls for 45 seconds of lunging with our arms raised.

Hermiz says a participant can burn anywhere from 400 to 1,700 calories each class. At the end of the four cycles, a heart rate monitor provided at the facility shows I’ve burned nearly 460 calories. While I’m proud of the number, I’m even more impressed that I pushed myself through the entire workout.

“If you did maybe one round of these workouts at a traditional gym you’re going to sweat your butt off, and you know what you’re going to say to me? ‘Man, I’m done. I did so much.’ Here, it’s not like that,” Hermiz says. “It’s visual, so you know ‘I have four rounds, I’ve gone through three, I still have one more, and I’m not going to stop.’ ”

With a goal to expand in the metro Detroit area, he says the visual nature of Area 45 Fitness along with a Top 40 playlist and customizable classes are why some of the gym’s members are reaching their fitness goals.

“I completely stopped my membership at another gym,” says Dr. Melissa Ebin, a 33-year-old chiropractor who has been taking classes at Area 45 Fitness since its inception. “I’ve seen changes in my cardiovascular system and my strength.”

Bianca Gagliano, a 36-year-old registered nurse who lost almost four inches off her waist in a month, has had a similar experience.

“I know when I used to workout at other gyms you could go there for two hours and never sweat like you do when you work out for 45 minutes [at Area 45 Fitness],” she says. “The lighting makes you almost feel like you’re at a club dancing. It’s really upbeat, and it’s nothing like I’ve ever experienced.”

Gagliano has been going to Area 45 Fitness up to five times a week since July. Currently, she’s working through a fitness challenge offered at the gym.

“It’s not like the traditional gym that everyone goes to,” she says. “And I think that’s important in working out because you need something different to motivate you.”

This site uses Akismet to reduce spam. Learn how your comment data is processed.